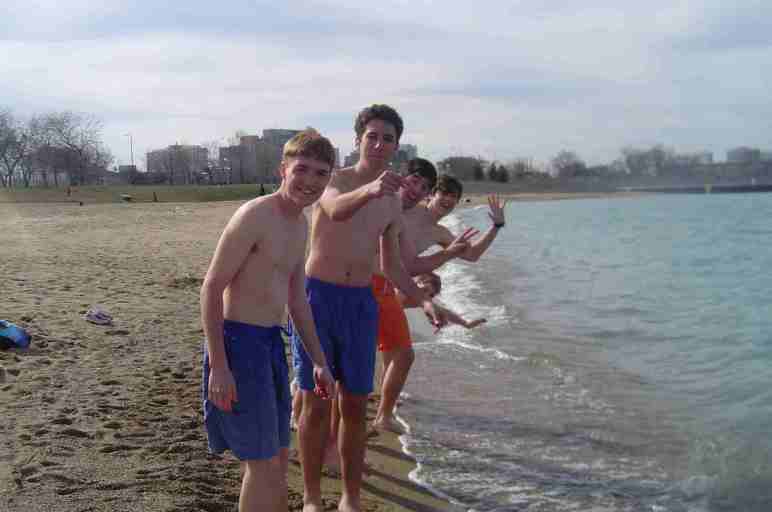 I wrote this immediately after the event.

The Priests and a one teacher and one deacon met today at the church for an activity.  It was planned a couple of months ago, when I was out of town.  When I heard what the plan was, I was a little bit skeptical.  The activity called for going down town to the Shedd Aquarium, and then to go for a polar bear swim in Lake Michigan.  I thought it sounded like the kind of activity that gets thrown out during those planning sessions that everyone laughs at and then the advisor has to say, “OK, so what are we really going to do?”  Somehow Steve Oscarson and Juan Matos hadn’t said that, so it ended up on the calendar.

Tyler Washburn, our Priest Quorum 1st Assistant, was out of town for last priesthood meeting.  I tried to get a sense from the boys if they really wanted to go do this.  I didn’t get a strong feeling that they did, but they weren’t willing to cancel it either.  They just didn’t want to plan it.  So, I said, “Fine, Ben,” speaking to our 2nd Assistant, “You will need to talk to Tyler when he gets back from vacation and plan this activity, and then let us all know what is going on.”  He agreed to do that.

I didn’t hear anything about the activity.  I thought of calling Tyler a couple of times, but I didn’t respond to the prompting.  This was theirs to plan I thought.  Finally, my sense of responsibility as the Young Men’s President kicked in and I called him Friday night to ask what the plan was.  He said he didn’t know, but he would call all the boys to find out.  He called back to say we had enough positive responses so we would meet at the church at 3:00 PM.  There wasn’t any specific plans, we would just meet and go do it then.

I was a little skeptical again.  But, hey, it was their activity.  If I showed up so they would have an adult with them, and drove where they told me, I had done my part I decided.  So that is what I did.

I was surprised to be requested by 3 boys, Tyler Oscarson, and Seth and Nephi Carter, to provide a ride to the church.  When we arrived, Ben Blakely and Trevor and Tyler Washburn where waiting.  Everyone had swim suits with them except for Ben.  He had made it known he wasn’t getting in the water way back at the planning stage, but he had committed he wanted to see it happen.  He also had his “Preach My Gospel” manual, to prepare the Priest Quorum lesson for tomorrow.

All the boys piled in the van.  I suggested perhaps we should have a prayer.  He asked T.O. (Tyler Oscarson) to say it.  Tyler prayed that everything would go according to plan, and that there would be no fatal injuries.  After he finished, I said it has really given me a great deal of comfort:  There was no plan to be followed and I was glad we weren’t protected from non-fatal injuries.  We all laughed.

I asked what we were doing.  Tyler Washburn said we were driving to Lake Michigan to go swimming.  Everyone seemed to be in agreement.  So we started to drive.  Seth had been talking about gospel discussions with his friend, so we talked for a few minutes about how to answer questions like why don’t women have the priesthood, and where did the Book of Abraham come from.

Tyler Oscarson pulled out a map, and so I had him find Chicago Portage National Monument, just off of Harlem Avenue.  I had wanted to know where it was.  Tyler also found a beach for us to go to off of Lakeshore Drive, 31st street beach.  As I considered what we were really going to do, I said, “30 seconds.  We won’t be in the water for more than 30 seconds.”

We parked and walked to the beach.  A lot of people out; it was a pretty nice day.  But everyone was in at least jackets.  People were flying kites.  A few guys were playing lacrosse.  We found that the dressing rooms were locked.  We probably should have anticipated that.  I was so sad to hear I couldn’t change into my swimming suit. L  T.O. and Nephi ran back to the van to change while the rest of us stood on the beach and waited.

I decided that if they were only going to stay in the water for 30 seconds I would try to make it interesting.  I said I would buy a banana split for the young man that stayed in the longest.  They all lined up, and Ben got the camera ready.  I started my stop watch, and they all ran into the water.  There was a lot of yelling and screaming about how cold it was, but they all went completely into the water up to their necks.

After 30 seconds, they were excited to announce that I had been wrong; then again at a minute.  After that it became a bit boring listening to them count off the minutes.  After a few minutes a couple of them got out.  But the others stayed in for a full ten minutes.  I started to get a little worried that my challenge about the banana split might motivate some unhealthy behaviors.  I finally said I was leaving.  The remaining boys got out.  I think all of them could have stayed in for the full 10 minutes if they had wanted to.

We got in the car, and they asked the heat to be turned on.  They said their arms hurt.  I could tell they were very cold.  But no one was blue.  Even Nephi, who was the smallest to attend, seemed to be OK.  Ben and I decided the van had a decidedly fishy smell to it.  We had to crack the windows for us.

On the way home I decided we needed to stop at the Portage monument.  We pulled off the freeway and everyone piled out to run all over the statue.  I recounted again why it was a historically important spot.  I was surprised they all listened so well.

We drove home, and I had to pay up at Dairy Queen.  The young men all laughed, told jokes, suggested other, usually more expensive ways, I could settle the debt.  I was impressed by how well they all get along together.

As I dropped one of the boys off at home, his parents asked how it had gone.  I said I thought it was about the goofiest activity I had been a part of.  They said, “Yes, but you know, it will be the one they will probably remember the longest.”  I had to admit that it had value in more ways than just that.  I am glad I took the time to go.