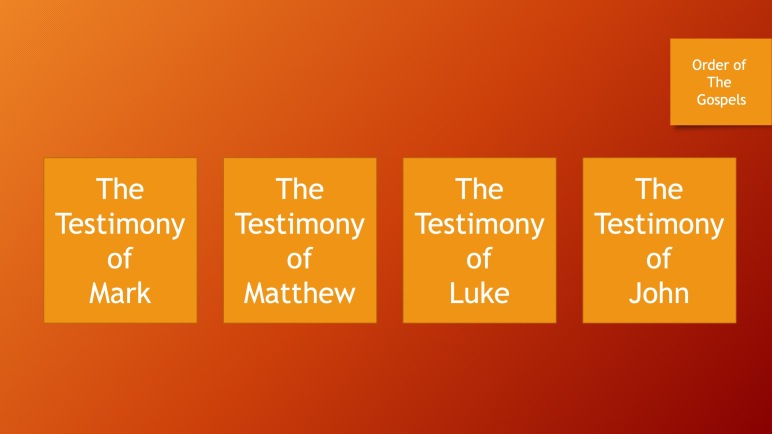 In reading the first couple of verses of Luke, I considered when it might have been written.  That caused me to think about what order the Gospels were likely written in, perhaps giving a some sense for each of their purpose.  I believe it was likely:

Mark is the shortest of the Gospels, and it appears both Matthew and Luke quote from it in their writings.  So it was likely the first, the ground breaking book, written perhaps by the first person to think how important it was, and how powerful it was, to describe what Christ had done and taught.

As the shortest, and perhaps least polished, it is easy not to appreciate it.  But realizing it was perhaps the groundbreaking book increases our appreciation for this treasure.

Matthew quotes extensively from the Old Testament, and seems to assume a thorough understanding of Jewish life and landscape.  Therefore, it was likely written to the Jewish population.  As such, it was likely the second book to be written, during the initial missionary efforts among the Jews.  Matthew likely had Mark’s book as a reference, and added more content and polish to the writing.  It is a wonderful testimony of the Savior from a faithful eye witness to the events.

Given the references to Luke found in Paul’s writing, it is clear they were contemporaries.  Paul’s focus on preaching to the gentiles is echoed in Luke’s focus there, in that he explains Jewish customs, and does not quote as extensively from the Old Testament.  It was therefore likely written as the focus of missionary efforts expanded outside of Palestine.  It has even more polish, more literary aspects to it.  It is a compilation of facts gathered from many parties, likely over a number of years, to be able to produce it.  What a great record it is.

John’s record is the most unique of all the Gospels, and in fact is not considered part of the synoptic gospels, which includes Matthew, Mark and Luke.  It is very likely John had access to them as he drafted his own record, thus able to focus on other parts of the life of the Savior not covered in those three.  John was promised by the Savior to be the last to die among his contemporaries.  His work may well have been written years after the other records because of that.  What a blessing to have his additional insight and understanding.

Although only Luke identifies the intended recipient of his writing, it is certain all the authors considered carefully their intended audiences:

1 FORASMUCH as many have taken in hand to set forth in order a declaration of those things which are most surely believed among us,

2 Even as they delivered them unto us, which from the beginning were eyewitnesses, and ministers of the word;

3 It seemed good to me also, having had perfect understanding of all things from the very first, to write unto thee in order, most excellent Theophilus,

4 That thou mightest know the certainty of those things, wherein thou hast been instructed. (Luke 1:1 – 4)

What a wonderful thing it would be to be Theophilus, and to have received this marvelous testimony from Luke.  Perhaps we should consider our own personal histories such a present for our children, testifying to the goodness of God, and his miracles, in our lives.

John is unique in his perspective, although all authors do not end the story of the Savior with death, John does not being with birth.  Isn’t it wonderful that we have mention of the pre-mortal existence of Jesus Christ?

2 The same was in the beginning with God.

3 All things were made by him; and without him was not any thing made that was made.

4 In him was life; and the life was the light of men.

5 And the light shineth in darkness; and the darkness comprehended it not. (John 1:1 – 5

And the Word was made flesh, and dwelt among us, (and we beheld his glory, the glory as of the only begotten of the Father,) full of grace and truth. (John 1:14)

Without this one passage of scripture, the New Testament would be certainly incomplete.